This is where you can read the manhwa. https://www.lezhinus.com/en/comic/painter  But be aware that this manhwa is a mature Yaoi, which means, it is about homosexuality with explicit scenes. If you want to read more essays, here is the link to the table of contents:  https://bebebisous33analyses.wordpress.com/2020/07/04/table-of-contents-painter-of-the-night/

Since I wrote a long analysis about “Legs That Won’t walk”, this time, my essay related to Painter Of The Night will be short. Nevertheless, I wanted to keep my promise to write each day something about this manhwa.

Now, you are wondering why I am focusing on Seungho’s mouth. The reason behind this is quite simple. I observed something very important while paying attention to the drawings. We have many pictures about Seungho’s gaze and the hands, yet Byeonduck did zoom in different chapters on Seungho’s mouth. All the following pictures have something in common. The reader can only see the protagonist’s mouth and each time, it is impossible to see his gaze. Why did the author focus on the main character’s mouth? This list is what I could gather so far (I might have missed some), nevertheless this selection will serve as an illustration.

We have this image in chapter 4: 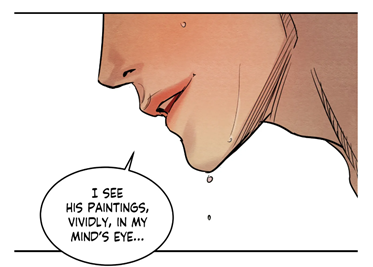 In chapter 12, Yoon Seungho is seen threatening the painter. 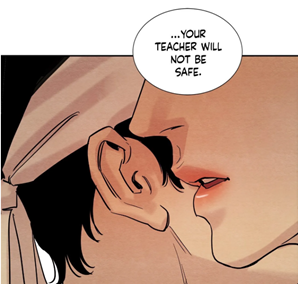 Then in chapter 16, the beholder witnesses how Seungho is calling Baek Na-Kyum by his name, while whispering into his ear.

Moreover, our main character keeps whispering in chapter 20, when he orders his loyal valet to close the door: 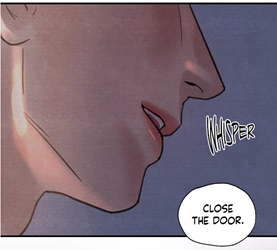 The beholder sees a similar drawing in chapter 35, although I have here to add two other pictures for the explanation.

In chapter 39, we even have two such drawings (here I added the one in the middle for the explication :

If you compare all these pictures together, you’ll note that there exists two kind of zooms focusing on the protagonist’s mouth.

The first one is, when he is talking to Baek Na-Kyum very closely. These mirror the evolution of their relationship. First, in chapter 12, he is threatening the low-born in order to submit him. We can observe that they have a master-servant relationship. Seungho has problems to approach and impress the man, so far Baek Na-Kyum showed a certain defiance in his behavior. Then in the chapter 16, he is whispering his name “Na-Kyum” revealing his intention of being intimate with him. While talking, he is even licking the commoner’s ear in order to arouse him. He is seducing him with his words and actions. Hence we can say that he no longer treats him as his “servant”. In the last one, the characters are kissing each other representing the climax of intimacy. Striking is that Seungho can’t help himself smiling and letting a sound out. He is expressing his happiness. Finally, the painter is no longer rejecting him, he is even reciprocating his kisses and his face is even blushing. So Seungho is finally able to have the man reddened. Each time, he saw the artist blushing for the teacher, he got so jealous and now, he can provoke the same reaction. The sound “pfft” shouldn’t be judged as the protagonist is mocking the painter. He is just showing his joy.

Now, the second kind of zoom on the main lead’s zoom is when he is speaking. These kind of drawings are important because these reflect the moment where the seme is expressing his deep thoughts and emotions. Remember that I said that the protagonist is someone who keeps his thoughts and emotions to himself. The drawings with the mouth only indicate that Seungho is opening up, is voicing his inner thoughts.

At the pavilion, he was actually talking to himself, since he paid no attention to Jihwa. He can’t help himself saying what he is seeing in his mind. He is amazed that he can feel so free… he is liberated from the oppressing and condemning gazes. He is accepting himself because of the painting. It was as if his own gaze from the painting had hypnotized him and helped him to overcome his trauma.

Then in chapter 20, he whispers to Kim to close the door. Sure, he doesn’t want to scare the drunk artist. However, I perceive the whispering, as if he has some problem to reveal his true desires. Here, he has to admit in front of Kim that he wants to taste the painter for himself. In fact, he is giving an order to the butler. Little by little he is opening up, expressing his true thoughts and as such revealing his true personality: his wishes and desires. At the same time, it exposes that the main lead is acting more and more like a lord.

In chapter 35, our protagonist is at his lowest. He could never obtain the artist’s heart and is about to admit defeat. Strangely is that the “camera” is focusing more and more on the protagonist’s mouth. First, with the gaze and after only with the mouth. We can detect here the main character’s struggles. He has problems to externalize his inner thoughts. He has no idea what he could say because he fears the painter’s reaction. That’s why he stops himself, the three dots illustrate his concern. The low-born could reject him one more time. Interesting is that we only hear the seme’s question in the black picture. The author lets the reader vizualize the main character’s shyness. He is expressing himself with great difficulties. It was as if he was hiding himself. But he is able to overcome his fear and shyness hence he asks the painter about the painting. Then in the chapter 39, he has no problem to show his reproach and concern for the uke in front of the servants. Little by little, Seungho is no longer hiding his desires and as such his personality. He starts more and more voicing his true thoughts and emotions.

That’s why we have less pictures with the mouth only. This mirrors his inability to voice himself. However, the readers assist to a transformation of our main character. We have to imagine that this man has lived like a zombie for a long time and was even the master of deception. He never externalized his inner thoughts and emotions. This explains why we have no love confession from our beloved seme. He is just at the beginning of opening up. He hasn’t voiced any inner thought in front of the painter. For that, he needs practice and time.

That’s the reason why my favourite chapter in the first season is chapter 39. For the first time, he shows to his servants that they can’t talk to the artist like that behind the master’s back. He is very protective of Baek Na-Kyum. We shouldn’t forget that he was well aware that his domestics were gossiping about him (Yoon Seungho) but he never intervened before. In the chapter 39, he makes a statement: no one is allowed to gossip about the artist and his relationship to the lord. He was very firm about this. And his words were pretty effective because later, Jihwa’s spy has problems to find out what is happening at Yoon Seungho’s mansion.

Moreover, we have the clothes showing Seungho as a man in love but he is still trying to hide these feelings. Furthermore, we get to see the inner thoughts from the main character with the drawing focused on the hand. 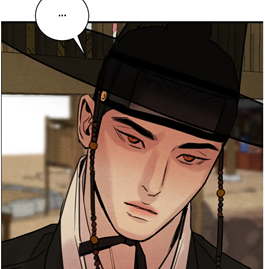 (Chapter 39) The beholder can detect his jealousy. Then the “pfft” reveals his ultimate happiness but he can only make a sound. He can’t even say it directly to the painter who has his eyes closed. In this chapter, the master is revealing himself the most. He shows his teasing side and his huge sense of responsibility as well. But this huge step forward can be explained that for the first time, Baek Na-Kyum accepted to share his bed with Yoon Seungho. However, this huge progression is stopped due to the events in chapter 41 and 42. Jung In-Hun did damage their relationship. They might have sex together but I believe that Baek Na-Kyum is not spending the night with the lord, like in chapter 37/38. But for that, Seungho needs to voice his true thoughts and feelings. Maybe the poem (see my analysis about the hypotheses for the second season) will help them to get closer again. Seungho likes poetry and it could help him to externalize his love for the painter.

Feel free to comment. If you have any suggestion for topics or manhwas, feel free to ask. If you enjoyed reading it, retweet it or push the button like. My Reddit-Instagram-Tumblr-Twitter account is: @bebebisous33. Thanks for reading and for the support, particularly, I would like to thank all the new followers and people recommending my blog.